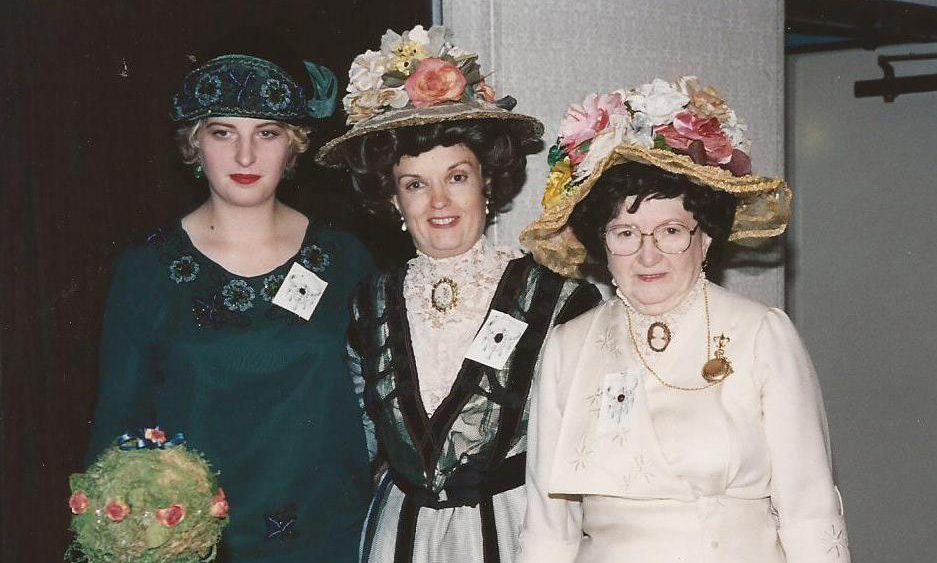 The story of
La Barre Books

La Barre Books was started in 1982 by Kathleen “Boots” La Barre. She was expert at collecting and dressing in antique clothing, and practiced matching her vintage outfits with her and her husband's vintage cars.
She was a founding member of the Horseless Carriage Club of America’s Portland Regional Group, and wanted to make it easier for her friends in the club to do the same.

Kathleen had a large collection of vintage fashion magazines, and she began tracking the changes in fashion by year and by subject on 3”x5” notecards. After eight years of writing and research and with the help of her daughter Kay, she published the Reference Book of Women’s Vintage Clothing 1900-1919 (now out of print).

As soon as the book was printed, she wanted to rewrite and revise it as two books, each covering one decade. But instead she moved forward and spent the next two years writing the Reference Book of Men’s Vintage Clothing 1900-1919. Two years after that, the Women’s 1920’s clothing book came out, followed two years later by the Reference Book of Children’s Vintage Clothing 1900-1919. Three years later, at over 500 pages her most ambitious book to date, the Women’s 1930’s historical fashion book was published.

The Horseless Carriage Club bylaws only allow membership for people who own cars 1932 and older, so after having covered the 1930’s, and with inventory of her first book dwindling, Kathleen finally felt she could return to the beginning and rewrote The Reference Book of Women’s Vintage Clothing 1900-1909, this time covering only the first decade of the 20th century. At over 400 pages she felt justified in her rewrite, as her original book reviewing two decades had only just over 360 pages. In 2006, Kathleen published her final book, The Reference Book of Women’s Vintage Clothing 1910-1919. After nearly 25 years of research and writing, she hung up her pen.

Kathleen died in 2010, just shy of her 99th birthday. She left La Barre Books to me, her granddaughter. I hope you love her meticulous descriptions of lorgnettes, fichus and cummerbunds as much as I do.
Writing these books was a labor of love for her, and I am proud to be the caretaker of her legacy.

More about the Authors

Kathleen La Barre, principal author, was born in Newport, Oregon in 1911. Her father was assistant lighthouse keeper at the Yaquina Head Light. The nickname she kept throughout her life — “Boots” — dated back to that time. Her family moved to the Portland area while Kathleen was still a child. She met her future husband, Warren La Barre, while working at Roberts Brothers department store in downtown Portland. After they married, Warren opened his own machine shop on Woodstock Boulevard. Kathleen took business classes and kept the books for him. They had two children, Rex and Kay, and lived in a little house near the shop. In 1962, Kathleen and Warren drove a 1923 Model T Ford Roadster to Alaska. They became founding members of the Horseless Carriage Club, Portland Regional Group, and spent their later years touring in the various antique cars Warren restored. Kathleen always in fabulous outfits that perfectly matched the year of the car, and it was this passion for exactly mirroring vintage eras that was a foundational inspiration for writing these historical fashion reference books. In 1987, she began work on the first of seven reference books of vintage clothing. Warren died in 1993, after nearly 60 years of happiness together. In 1999, Kathleen accepted her daughter and son-in-law’s invitation to come live with them in The Dalles. She passed away Oct. 18, 2010, at her home there. She is greatly missed.

Kay D. (Zimmerman-Butler) La Barre was born in Portland on January 18, 1944, the youngest of Kathleen’s two children. A popular straight-A student, Kay was active in many clubs and Franklin High School’s Theater Department, where she developed a love for costumes and characters that never left her. She had a beautiful singing voice and learned to play guitar in college, where she also studied the art of calligraphy under Lloyd Reynolds. After marrying Gary Zimmerman, a friend of her brother since childhood, she gave birth to her children: James, David, Larisa and Stephen. For much of the 1980’s, Kay worked at Pacific Photocopy (now Pacific Office Automation) as one of their top copier salespeople, and the walls of her home office were covered in “Salesman of the Month” plaques. She helped design a series of logos for the company. When her mother began compiling vintage clothing reference materials, she became the designer, editor and producer for La Barre Books. She passed away April 7, 2016 at her home in SE Portland. She is greatly missed.

Today, Larisa Zimmerman carries on the tradition of her grandmother and mother by continuing the sale of these unique reference materials.

We produce and sell our own 6 vintage fashion books covering the early 1900s, each with original illustrations and graphics sourced from the era.

The Author in Vintage Attire Their collection started as a direct result of the families interest in antique automobiles, with Kathleen expertly matching her outfits to her husband's restored vintage roadsters. Portland Regional Group of the Horseless Carriage Club